Medicare Supplement Plan G also known as the “Gold Plan” is one of the 12 standardized Medicare Supplement plans available. Aside from plans F and N, plan G is one of the most common plans. Plan G has the exact same benefits as plan F with one exception; it does not cover the Medicare Part B deductible ($166 in 2016). Besides that, plan G covers all other expenses that Medicare does not cover, just like Plan F. The reason Plan G is referred to as the “value plan” is for several reasons:

#2. Plan G Medicare supplement rate increases are much less on average than Plan F. The reason for this is almost everyone signs up for Plan F when they turn 65. They don’t have to answer any health questions when they sign up because they are guarantee issue when they turn 65. With many more people on Plan F (many of them not very healthy) the insurance companies have to pay out a lot of claims. This is forcing the insurance companies to increase rates to keep up with the costs of doing business. Plan G on the other hand has much less people, and many are healthy (because they have to answer the basic health questions to change plans). This allows the insurance companies to pay less claims and keep the rate increases to a minimum. 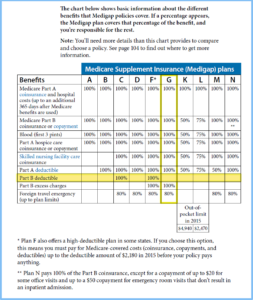 Also Congress has decided to eliminate Plan F starting in 2020. Everyone who has a Plan F at that time can keep it but insurance companies will no longer be able to sell a Plan F to new clients. This will result in EVEN higher rate increases for the folks who stay with their Plan F (no younger, healthier people paying premiums). The government thinks eliminating “first dollar coverage” will keep folks form overusing their coverage and will save Medicare money. Weather or not that will work is unknown, but you can do something to avoid those high rate increases; switch to a Plan G!

Overall Plan G is a better value. Not only do you save money on your premium now but you will save a substantial amount of money on the rate increases moving forward. You can request a free quote on Plan G by going here.